Some of the most common gallstones symptoms experienced by our California patients before surgery include abdominal pain, cramping, fever, heartburn, nausea, and vomiting, along with a feeling of fullness. These gallstones symptoms generally occur within a short time span after a person has consumed food since the stored bile is released at this time. We welcome California patients suffering from these gallstones symptoms to visit our team of gastrointestinal and digestion experts. Even if your gallstones are not bad enough to warrant gallbladder surgery, our nutritionist can help recommend a diet to manage the symptoms and lessen the impact on your daily life.

INTRODUCTION - This year more than one million Americans will discover that they have gallstones (cholelithiasis), joining about 25 million who already have the disorder. The development of gallstones is a common digestive disease.

THE GALLBLADDER - The gallbladder is a pear-shaped sac-like muscular organ that is approximately 3 to 6 inches long, located in the right upper side of the abdomen just underneath the liver. It connects with the liver and intestine through small tubes called the bile ducts. The primary purpose of the gallbladder is to store and concentrate bile.

Bile is a water-based fluid that contains bile salts, cholesterol, and other fatty substances (lipids), as well as waste products, such as bilirubin, a pigment that gives bile its distinctive color.

GALLSTONES - Gallstones are lumps of rock-like material that form inside the gallbladder. Cholesterol or other bile components may "precipitate" or settle out from liquid bile in the form of crystals that would then clump together, leading to stones. 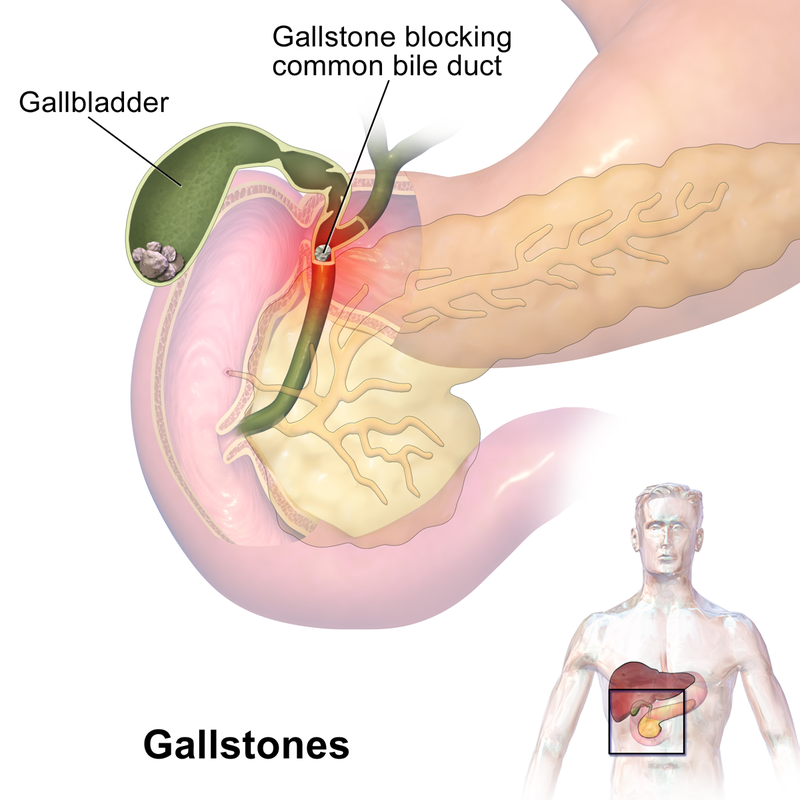 SYMPTOMS - Once a patient experiences the first episode of symptoms, the chance of having further and more severe symptoms becomes more likely, indicating a need for treatment.

It is characterized by episodic attacks of abdominal pain, which is most often located in the right upper abdomen just under the margin of the ribs but can also be felt in the back and right shoulder. Other associated symptoms include nausea, vomiting, and intolerance to fatty foods.

Recurrent billiary pain and cystic duct blockages can progress to total obstruction, causing acute inflammation of the gallbladder, which is marked by having fever in addition to other symptoms.

Surgical removal of the gallbladder is usually recommended during the hospitalization or shortly thereafter.

We believe that a healthy digestive system is a critical element in living a long, healthy life. All of the food, vitamins and minerals that we ingest must be properly broken down and absorbed in the digestive system in order to fuel our bodies. At the Beverly Hills Comprehensive Weight Loss Center, we do everything in our power to ensure that our patients have access to top notch nutritional counseling to sustain a healthy digestive system. However, rapid weight loss is often accompanied by gallstones symptoms experienced by our Beverly Hills patients. Obesity and pregnancy are two other factors that often lead to gallstones symptoms due to the fluctuating amount of cholesterol in the body. Since gallstones are made up in large part by cholesterol, excess cholesterol in the body contributes to gallstones symptoms and formation in our Beverly Hills patients who are overweight.