Gastroesophageal Reflux disease, or GERD, occurs when stomach acid escapes the stomach and travels upward to an individual’s esophagus. This condition is synonymous with frequent heartburn and affects as many as two-thirds of the adult US population at some point in their lifetime. In less severe or frequent cases, heartburn is usually treatable with diet and lifestyle changes or with medications, many available over the counter. However, severe and/or chronic cases of GERD send as many as five million patients to the hospital per year.

Minor symptoms of gastroesophageal reflux disease include heartburn and damage to esophageal tissue. According to the US National Library of Medicine, however, GERD can also have less obvious symptoms including “dry cough, asthma symptoms, or trouble swallowing.” If left untreated, serious medical concerns can arise. Esophageal cancers and airway disease are both known complications of GERD. Barrett’s esophagus is another potential complication in which the lining of the esophagus begins to resemble the tissue of the intestine, further increasing the risk for malignancy or cancer. 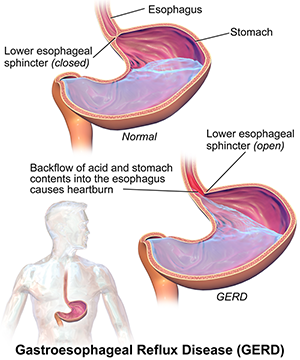 How does GERD develop?

The exact process of how GERD develops in patients is not fully understood, but it is believed to be caused by a weak or overly relaxed lower esophageal sphincter (LES). The purpose of the LES is to prevent food and stomach acid from escaping the stomach; however, in GERD this is not the case.

It is also possible that one or more of the following may contribute to GERD as well:

As a leading surgeon specializing in the digestive area, Dr. Michael Feiz has helped countless GERD sufferers. Surgery, of course, is always a serious matter; before the procedure can occur, we provide objective documentation of gastroesophageal reflux to our patients. An esophagoscopy is generally the first method of diagnosis. Tissue samples are likely to be taken during this procedure if inflammation is apparent in the esophagus (this can also be referred to as esophagitis). In the event that esophagitis or reflux is not evident, a 24-hour pH test may be ordered by your doctor to provide proof. If, however, the esophagoscopy finds evidence of Barrett’s esophagus, this can be used as objective documentation.

Who is Anti-Reflux Surgery Intended For?

A surgery known as Laparoscopic Nissen fundoplication is currently the standard operation for treating gastroesophageal reflux disease. The procedure basically reinforces the entirety of the lower esophageal sphincter. During the operation, the esophageal hiatus is made narrow by sutures to either treat or prevent a concurrent hiatal hernia. Afterward, the patient’s upper stomach, or fundus, is made to encase the lower portion of their esophagus and secured by stitches.

Many studies suggest that anti-reflux surgery is a strong alternative to medications for acid suppression as surgery reduced acid exposure to the esophagus in addition to greatly reducing pressure on the LES compared to medications. Many patients are able to stop taking related medications after the surgery as well and the rate of patient satisfaction is objectively higher than those who stick to medication regiments.

If you are dealing with painful symptoms of GERD that don’t respond well to drugs or dietary and lifestyle changes, then a procedure may be the best route. To find out more about working with our team of outstanding medical professionals at Dr. Feiz & Associates, call us today via the phone number on this page or reach out via our contact page.